Parade Step Off @ 10:30 AM at Poplar & High
in the Short North Arts District 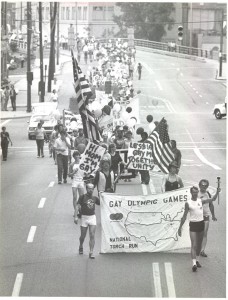 The first Pride march in Columbus, Ohio was held in June 1981. Only 200 people were in attendance, and some even wore bags over their heads to conceal their identities. This year, we celebrate the 38th Year of PRIDE in Columbus.

In 2018, we were joined by over 200 unique marching contingents, representing a vast array of non-profits, community organizations, corporate sponsors, small businesses, political candidates and activists! Over 12,000 people marched in the parade and an estimated 500,000 attended Pride. Help us celebrate and recognize our 38th PRIDE by joining us!

No contingent? Just want to march with your friends or family and show your support? Join the Community Marchers!

Columbus Pride is thrilled to celebrate Andrew Levitt (famously known as Nina West) as Columbus’ 2019 Pride Parade Grand Marshal. We celebrate his artistic accomplishments, advocacy, and philanthropic endeavors. Established at the Columbus Foundation, Andrew created The Nina West Fund which has raised more than $2 million in support of charities such as the ACLU of Ohio, Kaleidoscope Youth Center, Equitas Health, Planned Parendhood of Greater Ohio, Dress for Success Columbus, Besa Community Inc., and Ronald McDonald House Charities of Central Ohio, Inc. Additionally, his merchandise and personal appearances have raised generous amounts for national organizations such as the Matthew Shepard Foundation.

“It’s mind-blowing to know how giving people are. It’s just amazing to me. Columbus is a really giving community and it speaks to how close-knit and tight our LGBTQ community is. One of my favorite things about what I do, now more than ever, is making a connection with families, kids, and LGBTQ families and their children,” Andrew said. “Giving families access to the art of drag is pretty powerful and awesome.”

With his charm, warm heart, tremendously booming voice, and thoughtfully clever artistic vision, it is no wonder Andrew Levitt has won a place in the hearts of the entire LGBTQ+ community in Columbus, Ohio. As a current contestant on RuPaul’s Drag Race Season 11, he is also winning hearts around the world. Columbus Pride officially kicked off the 2019 Pride Season with a brand new event: Beyond Binary. This event was a celebration of Transgender, Gender Non-Conforming, and Gender Queer members in our community. As part of this event, 12 Columbus-based Transgender Activists took part in a fantastic piece of artwork – a life sized mural painted by Rae Senarighi. The work is currently on display at Stonewall Columbus, along with the artwork of several local Trans and Queer artists. This display will remain in the gallery through Pride season. The mural will permanently reside within Stonewall Columbus.

The activists in this photo and painting are being honored for their willingness to stand tall, speak out, and represent the community. They will be riding on the Stonewall Columbus float alongside the Grand Marshal. Join us in thanking these tremendous individuals for their work in Central Ohio.